Around  July 1st, 2013, Lindsay’s parents Graham and Cathy Dorn came up to visit us in Alaska before we moved away. Between family coming to visit, “quitting” both of our jobs and moving our house to Maine it quickly became apparent that we would not be working out or “training” with any consistency for the next several weeks, and in reality, the 16 months. Lindsay decided not to compete at USAPL Raw Nationals for this reason and after a full spring competition season with Lindsay setting a state record in a powerlifting meet, both of us doing well in our first strongman competition and I (Clay) won the Amateur ‘C’ division of the Eagle River Highland Games we decided to call it quits as we hit the road. Nonetheless, throughout our drive we tried to stop at a gym here and there in an effort to halt the inevitable decline of our physical prowess and get some much needed stress relief to keep us from killing each other. On one such occasion we showed up to a hole in the wall strongman gym at 7pm on a Friday night in Regina and we were promptly recruited for a competition they were having… at noon on Sunday. 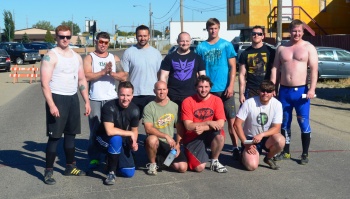 The Men’s field at the end of the day

After a little bit of contemplation and playing with the implements and the weights we would be facing we decided “what the hell!” At the very least, even if we bombed out, it would give Lindsay’s family a chance to see what we do with our spare time in Alaska and that we aren’t joking when we tell them that we “pick things up and put them down”. We each had 5 events and almost no time to prepare for them so we decided to just give it our best shot. 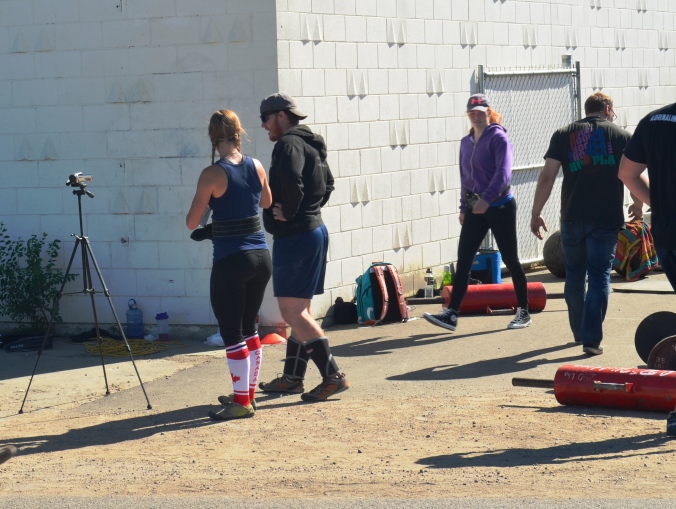 Lindsay and Clay talk through the next event

Lindsay ended up fighting through a day that wouldn’t necessarily be her fondest memory. She came in fifth and while she refuses to make excuses for herself it should be noted that she had  1) 40hrs notice of the competition. 2) Was in the middle of getting over an ass-kicking head cold/sinus infection that zapped any of her strength 3) After losing 5-10lbs of muscle on the drive out of Alaska she gave up about 20lbs of bodyweight to the next lightest female competitor (HUGE in a competition w/out weight classes) and finally 4) She is a powerlifter not a strongman competitor! Weights on a barbell she crushed, but the odd shaped implements beat her on an experience level not a strength level. 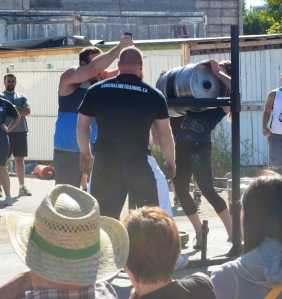 Lindsay ended up fighting to the end to set two personal records, first with a 100lbs Clean and Jerk that looked effortless. She also managed to get the 130lbs keg over a 50″ bar on her third attempt, which had been her arch nemesis in practice.

I had a decent day for it being just my second ever strongman competition, placing 3rd of 11.Starting from behind with a 7th place finish in the tire flip, I let the jitters go and decided to just have fun for the rest of the day. Now that I didn’t put any more pressure on myself I pressed the log 8x times for a 2nd place in the press event. Because I placed 2nd in the log press it put me in the final “heat” for the farmer carry. They had the men go “head-to-head” meaning the 1st and 2nd place from the previous event would be racing each other and with about 25′ to the finish I was making my pass to get what would’ve been first. The weight in my left hand twisted slightly and I kicked the plate with my heel… dropping the weight. By the time I could get to the weight back up and cross the finish line I ended up with a 5th place time.

I had been waiting for the second to last event all day, the 405lbs Deadlift for reps. The deadlift is my strongest gym lift and I was ready to leave it all on the platform, despite the daunting 75s of continuous effort. One of the other competitors who the field regarded as the strongest deadlifter at the competition went before me, getting 15 total reps. With a motivational carrot dangling in front of me I planned on beating him or passing out trying; there was no compromise. Well with about 3 seconds left I raised the bar a 16th time, good enough for 2nd in the event. The Atlas Stone, the last event, was another where I placed 2nd, my third 2nd place of the competition which put me only 2 points shy of a second place in the overall standings. 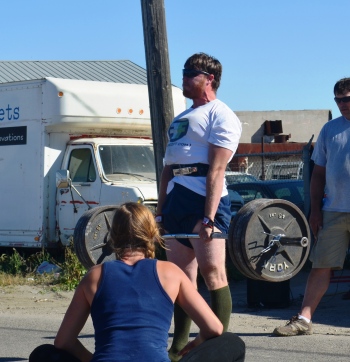 All in all, a great day for us to represent Forged Fitness in another competition and show Lindsay’s family what we do up in Alaska. Special thank you again to all of the people that came out to spectate and cheer us on!