It seems only fitting to begin a blog that covers the journey from being an Infantry Officer to a Dirty Hippy, of one who travels the world on the day that the transition officially began.

Clay receiving his first salute as a 2nd Lieutenant from brother, Phil Richardson

I say officially because the transition started in one shape or another at least 12 months prior to the 31st of July, 2013. I’d also like to note that the two writers on this blog, Lindsay and Clay will post from their point of view exclusively, so if Lindsay has something on this topic – or any others – she’ll put it in her own post.

For a brief history lesson, the transition started in August of 2012 while Lindsay and I enjoyed a little mid-tour Rest and Relaxation (R&R) in the UK over the period of the Olympic Games.

Between burning our candle at both ends to take in the live Olympic events, the British culture, major landmarks like the cliffs of Dover or Stonehenge, traveling to the Highlands of northern Scotland and a trip to Dublin to reconnect with a long time friend, we were able to talk in person for the first time in 8 months. We chose to talk about the future. When I took my commission as a Second Lieutenant in 2009, I only incurred a 4 year requirement which left a lot of options open the summer of 2013. I recently found out a month before the London trip that I had been selected to attend Special Forces Assessment and Selection (SFAS), the 4 week tryout for Army Special Forces which had been my end goal from the day I joined the Army.

Clay on deployment to Afghanistan with local police

Well nonetheless, after some long train rides and a lot of soul searching we made the decision to turn down my slot for SFAS and when the time window came I would “drop my packet” to end my commission and leave the Army. It really came down to a pro’s and con’s list and a reflection of my personal bucket list and a list of things Lindsay and I have dreamed about doing before we get old and decrepit. If I went to Special Forces I would’ve checked one block off mybucket list but put my career ahead of my marriage for at least 5 more years. I wouldn’t be able to get out of the military until at earliest the age of 30. This meant that we wouldn’t be able to hike the Appalachian Trail, travel the world or go back to school before we started working on a family. The pro’s for leaving far outweighed the cons. I asked Lindsay to go through the first couple years of this journey in the Army and take an admittedly back seat to my career and now it was our turn to be a couple and do what WE wanted to do. I kept my decision a relative secret until after the Captain promotion list came out, I didn’t want any politics to affect a very important promotion and if I wasn’t in the 9 month window of submitting my paperwork, they didn’t need to know. So technically, the mental transition started about a year ahead of the day I signed on the dotted line. 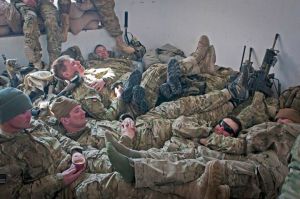 To spare the boredom of explaining military paperwork inefficiencies and bureaucracy let’s just say getting out of the military is a much more difficult process than joining. To the dismay of my superiors, peers and subordinates I made the paperwork official around Christmas of 2012 and started the official transition out. This included teaching my replacement my current position of Company Executive Officer; consisting of a miserable combination of paperwork, babysitting grown men, excel sheets and PowerPoint, reading thousands of serial numbers and most importantly, putting out a daily fire that for some reason no one else could. Also involved in this transition was a lengthy process administered by civilian career counselors that could set someone up to go into the job field, into the world of academia or an entrepreneurship route. Of course, being difficult, I took all three paths and got my full money’s worth out of these advisors over a three month period.

(Boring part complete. Congrats on making it through!)

Now I realize this blog post is not that interesting but the history is a necessary part of why I am writing a blog post on Lindsay’s computer on the floor of an unfurnished Calgary condo at 11pm. Now, let’s return full circle to July 31st, 2013 when I signed on the dotted line and received my discharge paperwork from the US Army. I expected music to sound from the heavens, angels to fly and the weight of the world to be lifted off my chest. Not so much. You see, as a privilege of my rank and job performance I did not have much supervision over the past month. I took care of the things that needed to be taken care of, I showed up on time when I had to be at work and no one really cared what I did. Signing my discharge papers transformed from a culminating moment in my career to just another digital signature in someone’s office. I already mentally checked out a month prior.

So we start this blog series on this great journey that Lindsay and I are going on when in reality… the first day of the journey was just the same as any other day in July…except that I didn’t have to shave.

Yes, a slight let down, but you know what? I don’t have to shave or cut my hair if I don’t want to. And that’s good enough for me.