We’re back on the trail heading north again and now that Lindsay is feeling better, that might be the only thing we are certain about! Not only do we have Lindsay’s recovery to take day by day but we also added another member of the team to the mix and Hunter has his first 35 trail miles under his belt (or harness). Now that we have the dog we decided to leave the last 40 miles of the Smokey Mountains until October and continue north from the edge of the Smokies as a team of three.

Some really cool dead tree bark that we liked.

We re-started the trail knowing that Lindsay was likely coming back a bit too early but since it could take a month to fully recover, she decided to pull the trigger and get going sooner rather than later. Because of that, we carried a minimum amount of food and supplies and shipped the rest to Hot Springs, NC (35 miles ahead) which is where we would have our first chance to reevaluate our progress thus far. She dropped her pack weight down to about 20lbs which eased her injury pain and Hunter traveled with an empty pack; leaving the team mule to carry four days worth of food for three! Fortunately, I’m a bit of a professional at walking through the woods with heavy crap on my back so it didn’t end up being a problem for anyone!

Supposedly this is an FAA navigation tower after leaving the Smokies. Looks like a UFO space ship to me.

Coming out from the Smokey’s Northern border turned out to be pretty much the same as the past 240 miles behind it; a lot of hills and trees and nothing else. We took the first afternoon very easy and only logged 5 miles, allowing everyone to get reacquainted with this hiking thing. After day one, everything made a turn for the better as the trail smoothed out and Lindsay’s tailbone felt fine and we had what turned out to be our most enjoyable day on the trail. The views off of Max Patch Bald had to be one of the best we had seen since starting the AT and then the beautiful farm country and peaceful winding streams that we followed for the rest of the day put everyone in good spirits regardless of how tired we were! 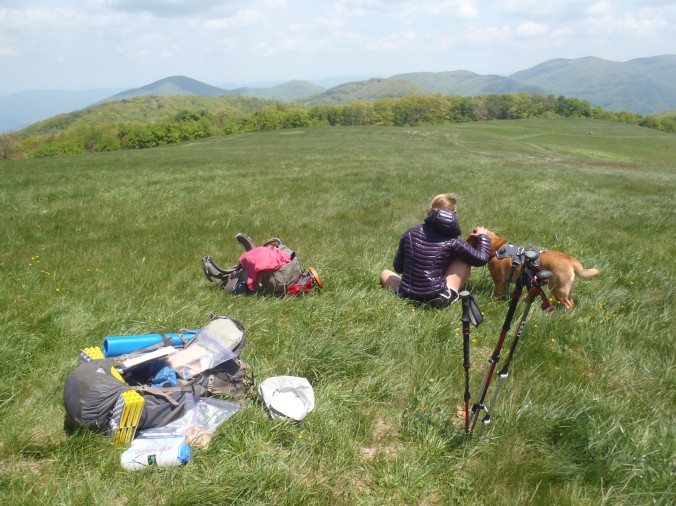 Hunter and Lindsay, hanging out on Max Patch 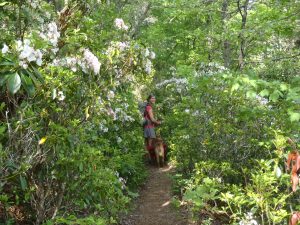 Lindsay and Hunter in the flower blossoms.

We made it into Hot Springs with one of our top 5 longest days yet, which turned out to be a bit too much for Hunter, especially in the heat of the day. I took his pack for him for a couple miles and we all enjoyed a three hour rest in the shade during the mid-day heat which had him in peak squirrel chasing form for our last three miles into town. 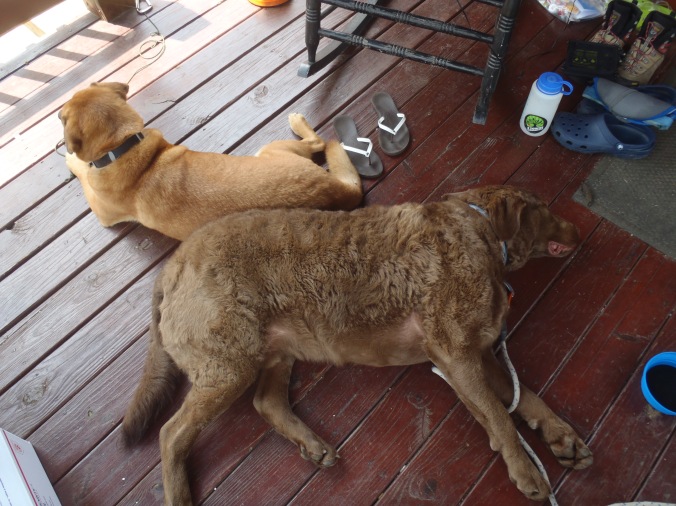 All in all, it’s been a good re-start so far. Lindsay is a trooper; probably tougher than 1/2 of the guys I worked with in the Army and as long as he doesn’t get too hot, Hunter is in his element being outside. Our big test is coming up though, a 14 day stretch to Damascus, VA where we hope to have a high daily mileage, in the 15s’, after we leave town tomorrow. Luckily, Hunter made a friend and we plan on walking with George and Bear (George’s Dog) for the next couple days, since he can tolerate a dog barking at everyone he sees! We will definitely be forced to wake up early in the mornings to avoid the heat and then rest through the hottest part of the day, hopefully enjoying an afternoon siesta and keeping us out of the afternoon thunderstorms anyway!