After a half day in Erwin to get a few supplies and some take out food, the boots kept walking north in a two week effort to get from Hot Springs, NC to Damascus, VA by the 5th of June. As the number of major mountains to climb changed from something you need fingers and toes to count to just a handful left, the lofty goal became something obtainable. After a day off in Hot Springs we planned on two 1/2 days during our 14 day run to Damascus and then a nice two day break in “Trail Town USA”. Well, as plans often go…

Awesome valley we walked through after leaving Erwin, TN

After some less-than-spectacular scenery on the Hot Springs to Erwin leg of the trip, the AT rewarded us with an incredible walk out of town on the 29th. We took a meandering 4 mile walk through a valley floor, which is an oddity on the AT as you are normally on ridge lines or going over mountains. The valley seemed almost prehistoric and untouched by human hands, with massive old growth spruce trees that shaded out the sun so that even the mid morning light turned into eerie, dusky rays trying to penetrate to the forest floor below. We followed and crossed over a winding brook as it babbled over rocks and under fallen trees, feeling like we were on a fantasy movie set where the elves and fairies lived and people didn’t dare tread. After leaving the forest floor, mother nature treated us later in the day yet again as we climbed to the aptly named “Beauty Spot”. The trees started to thin and the hot mid-day sun beat on the back of our necks as we climbed the ridge line, testing  both Hunter’s and my own heat tolerance! Our efforts were rewarded though, as the heat turned ground moisture into humidity and the blossoming shrubs and bushes of the southern Appalachians opened up and their scent hung in the heavy air. We ended up walking close to a half mile through what could have been a greenhouse or perfumeries if one didn’t know that it was just a mountain spur in Tennessee. This was one of the days that reaffirmed why we are spending the summer walking 2,200 miles; to get out of the rat race and literally smell the roses.

White blaze is a happy blaze. He makes walking in the rain better.

This whole leg didn’t end up being sunshine and happiness though, as we had our first trail intersection miss of the trip. In our own defense, a poorly marked turn off to a small resupply site is what did us in and it doesn’t help that the very unfriendly neighbor or the Greasy Creek Friendly tears down any signs to keep the “Hiker Trash” from invading his area! Well nonetheless, we went speeding right past our turn and didn’t realize it until we were a mile and a half past! It wouldn’t have been THAT big of a deal except Hunter had a week of dog food mailed there and would NOT have been impressed if we didn’t pick up our box! Well as you could probably guess, with the combination of an extra 3 miles of backtracking and then an afternoon of rain, this was not one of our happier days on the trail.

Laurel Falls with an artistic touch. Turned out alright! 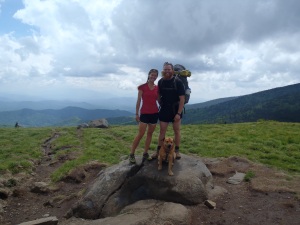 Posing for a nice shot on top of the balds after Roan Mtn.

Despite a little bit of whining and complaining, it’s hard to have too many bad days in a row on the trail and the day after our Greasy Creek mishap we ended up spending a beautiful afternoon walking the last 6,000ft mountains and grassy balds of of the Southern Appalachians. We made a long climb up Roan Mountain and took the next 10 miles leisurely, walking along exposed ridges, saddles and even took a small detour to the only natural 360 degree view on the Appalachian Trail above 6,000ft! Normally we call the walking quits when we get to our dinner stop for the night but we decided to push on and get back to the balds for a “Serengeti Sunset”. … Unfortunately the clouds came back at sunset and we ended up camping at the top of a mountain in  cloud with 30′ visibility!! Oh well, I’ve spent nights in worse places…

The neat sign marking the end of the NC/TN shared section.

Part of our motivation, besides the possibility of a beautiful sunset, for pushing past dinner and getting a little further down the trail was the “EPIC” breakfast held each morning at the Mountain Harbour B&B. We had to wake up at 5am and hurry for 6 miles to get there in time but EVERYONE said that this was the best breakfast on the trail so far, and we had to eat there. Well, we packed up our tents with the help of our headlamps and somewhat jogged down the hill to get there in time. At 7am, George called ahead to let the owner know that three hungry hikers were enroute. Her response? “Sorry, this is the first day in two months that I haven’t done breakfast but I’m not feeling well today.”

Shit. Hitchhiking to a greasy spoon and using our tears of anguish to wash down the sausage and home fries it is.

Lindsay and George hiking in the rain on the way to Damascus, VA.

Our Tennessee A.T. adventure came to a close on the 6th as we crossed the border and walked into “The Friendliest Town on the AT”, Damascus, Virginia. After a bit of a delay at the Black Bear Resort a few days in Hampton, TN (more on that later) we left the mountains and jumped on the “Tennessee Highway”. The fondly referred to and much loved Tennessee Highway is a flat, smooth, rock-free and straight 40 mile section of trail that didn’t have a climb over 400 feet and brought us into town just in time for some much needed beer and barbecue!